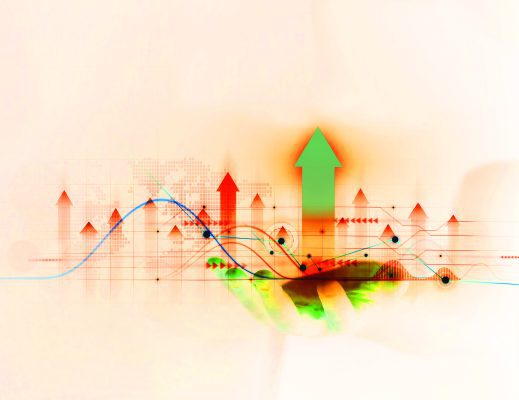 Over 4,380 nurse clinicians and managers from across the United States shared their thoughts about their jobs, including salary, satisfaction, and workplace violence.

*Editor’s note: Because of rounding, the total of some percentages may not add up to exactly 100%.

Over 4,500 nurses from coast to coast gave us their…

Learn what more than 4,000 nurses from across the country…

You might be surprised by what your colleagues are saying…

American Nurse Journal’s sixth annual Nursing Trends and Salary Survey reflects some positive movement, such as improved response to reports of workplace violence and slightly higher job satisfaction. But challenges, such as ongoing staffing shortages and incidents of violence, continue. Fortunately, nurses seem ready to face those challenges: For the sixth straight year, most respondents (82% of 4,397) would choose nursing as their profession again. Here’s a closer look at some of the key survey findings, which include aggregate data and some comparisons between clinicians and nurse managers.

Unsurprisingly, a clear message from the survey is that staffing recruitment and retention remains a difficult challenge for clinicians and managers, although some results indicate a slight improvement. Open positions over the past year increased for about 63% of managers, down from 71% in 2021, and 61% reported increased RN turnover in the same time frame, down from 72% in 2021. Nearly two-thirds (64%) of managers reported that recruitment had become more difficult in the past year—lower than the 76% in 2021—and more than a quarter (27%) said RN turnover had decreased.

Respondents’ future career plans indicate that staffing difficulties may continue. Nearly a third (31%) were currently seeking a job with another employer or planned to in the next 3 months, up from 23% in 2021. When asked how long they plan to stay with their current employer, 38% indicated 5 years or more, compared to 40% last year. Nearly 13% plan to stay less than a year, with another 27% planning on 1 to 2 years. The top three reasons why nurses wanted to leave their employers were dissatisfaction with salary (29%), dissatisfaction with work environment (22%), and better schedule (22%). (Participants could choose up to three.) 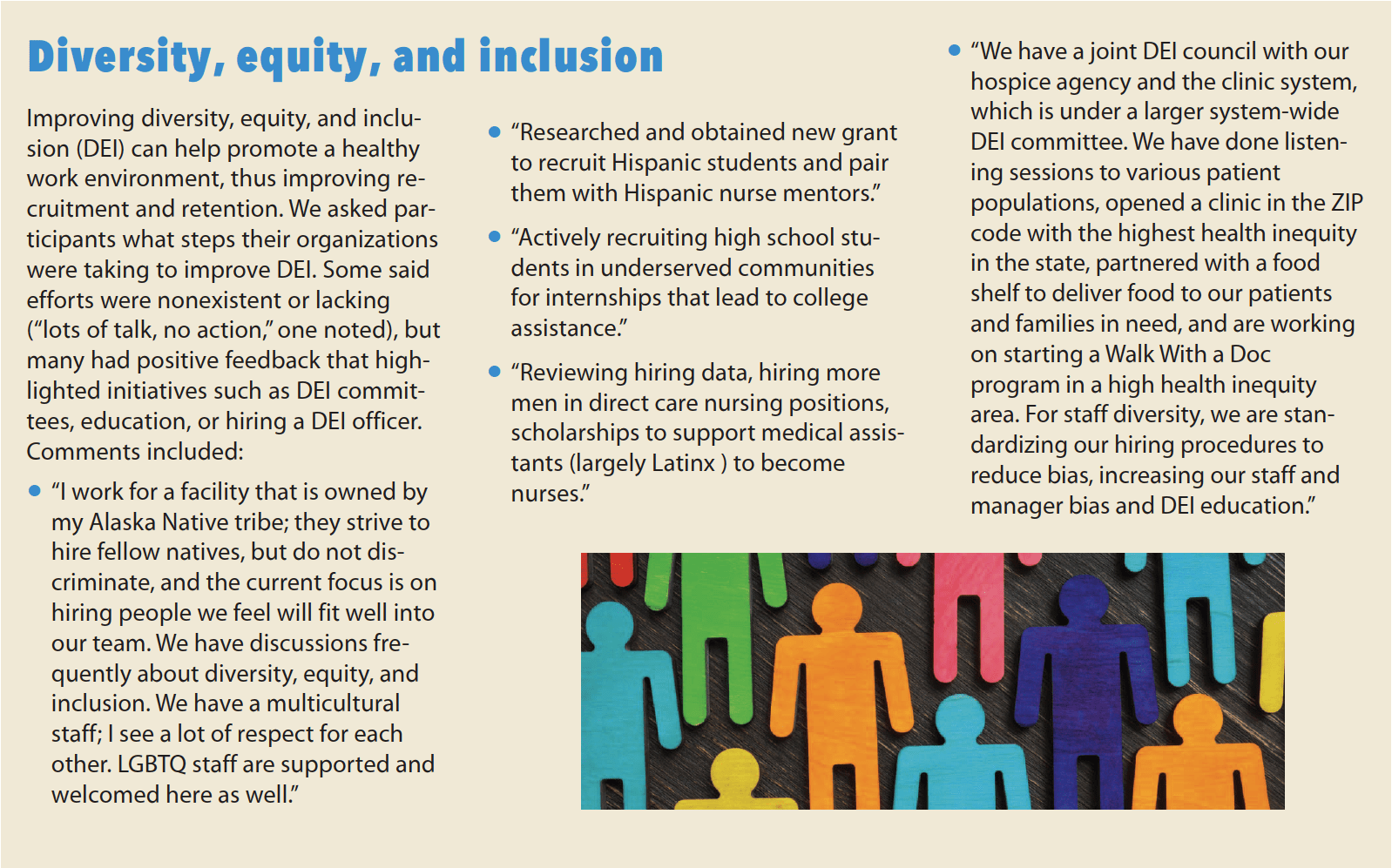 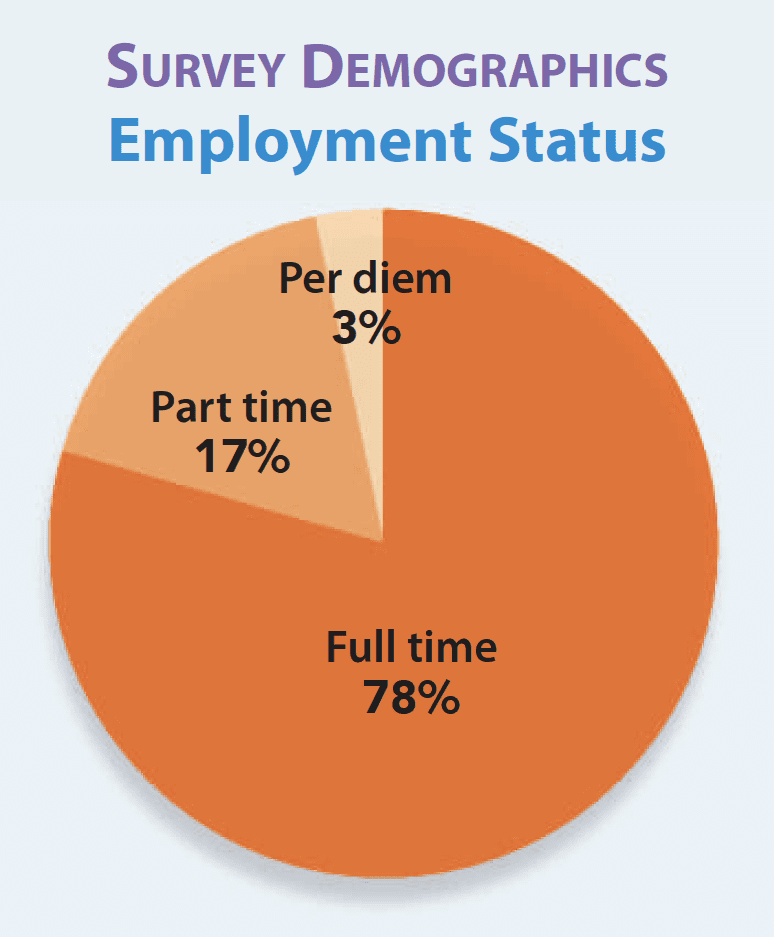 The most common benefits respondents reported receiving were health insurance (60%), paid time off (58%), and dental insurance (54%).

As expected, those who work 35 hours or more a week receive more benefits. For example, 67% receive health insurance and paid time off. Other higher percentages included 60% for dental insurance, 55% for retirement benefits, and 51% for vision insurance.

About half (48%) of nurse managers received a discretionary bonus in the past 12 months, with another 23% receiving a nondiscretionary bonus; 7% received both. Nearly half (49%) of clinical nurses received additional compensation for shift work. Other areas where clinical nurses received additional compensation included certification (36%), charge nurse role (32%), serving as a preceptor (32%), education level (31%), and clinical ladder (22%).

Almost half (48%) of nurse managers who responded to the survey had been in a management role for 5 years or less, and only 21% had 11 or more years of experience. Most (44%) reported that they supervise 10 or fewer employees, with 38% supervising between 11 and 30. In all, 42% had been with their current employer for 5 years or less, with another 28% falling in the 6- to 10-year time frame. 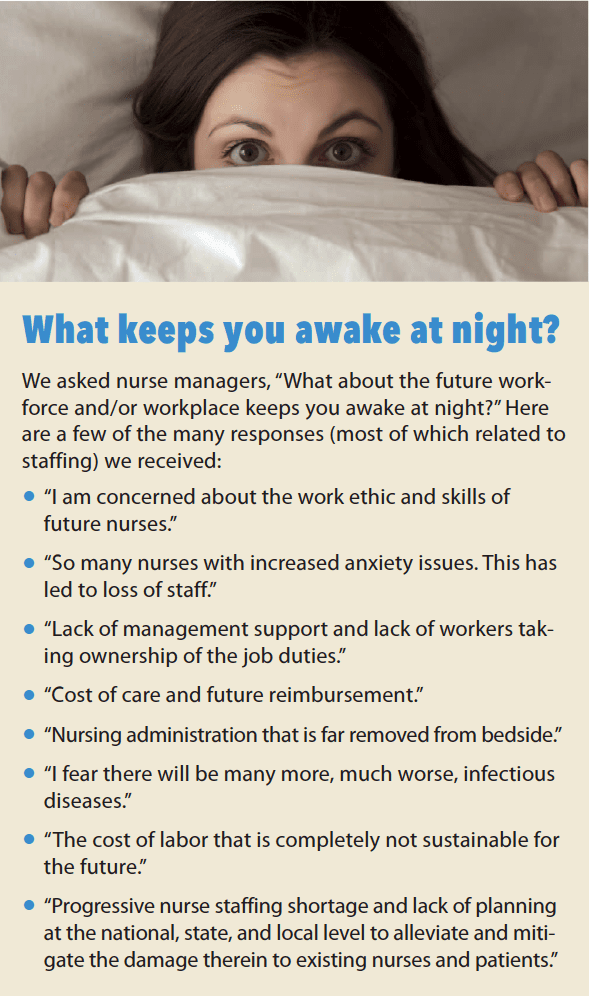 Most managers (68%) reported that their workload had increased in the past year, down from 78% in 2021. However, respondents carved out time to become certified—71% reported holding leadership certification, up from 27% in 2021 and 18% in 2020.

About half of nurse managers who responded to the survey held the position of charge nurse (29%) or nurse executive (chief nursing officer, chief nursing executive, or vice president of nursing, 23%), followed by director or assistant director (19%). One-fourth worked in an academic medical center. The highest levels of education were bachelor’s degree in nursing (27%) and master’s degree in nursing (26%).

Other interesting observations from manager respondents included the following:

Among clinician respondents, 44% reported a certification in their chosen specialty, up slightly from 39% last year, and 64% noted that their workload had increased in the past 12 months. Slightly more than half (53%) work 12-hour shifts on a regular basis. 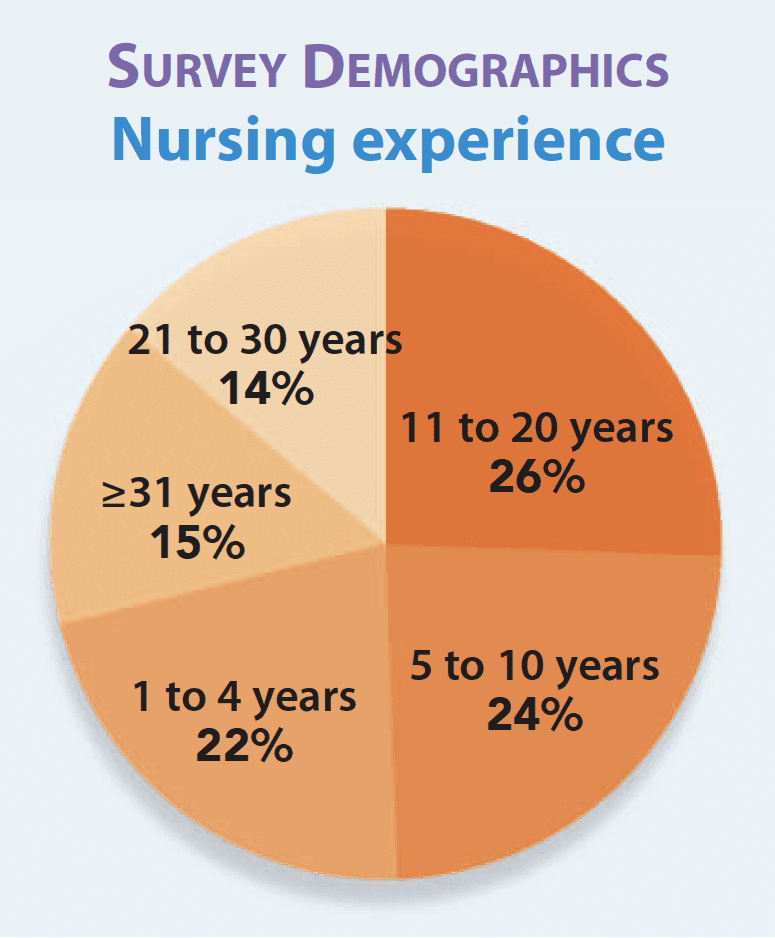 More than half (54%) of clinician respondents had worked for their employers 5 years or less, while 20% had been with their current employer for 6 to 10 years. In all, 23% work in a community hospital, with another 23% in academic medical centers, and 9% in teaching hospitals. More than half (58%) work in acute care, and the most common role was clinical staff nurse (52%). Medical–surgical was the most common specialty (16%), followed by critical or progressive care (11%). Most clinicians (44%) have a bachelor’s in nursing as their highest degree, with 23% having a master’s degree in nursing.

Most nurses view staffing committees as a positive way to address issues, but only 14% of clinician respondents serve on such a committee, and nearly half (48%) report that their organization doesn’t have one. That may be one reason why 51% of clinicians responded “no” when asked if staffing assignments were appropriate to meet patient needs at least 80% of the time.

Salary was the most common response when asked to choose the three most important aspects of nursing (71% chose this as one of their three options), but more than half also responded providing patient care (55%) and flexible hours (51%). In addition, 39% selected opportunity for career growth.

The survey revealed a few key differences between managers and clinicians. Overall, managers reported more satisfaction with their job, salary, benefits, amount of authority, and ability to advance in the organization. Managers also were more satisfied with the amount of time worked, compared to amount of overtime worked by clinicians. However, given that the highest weighted average among the responses was 3.78 on a 5-point scale, more work is needed to boost satisfaction in both groups. 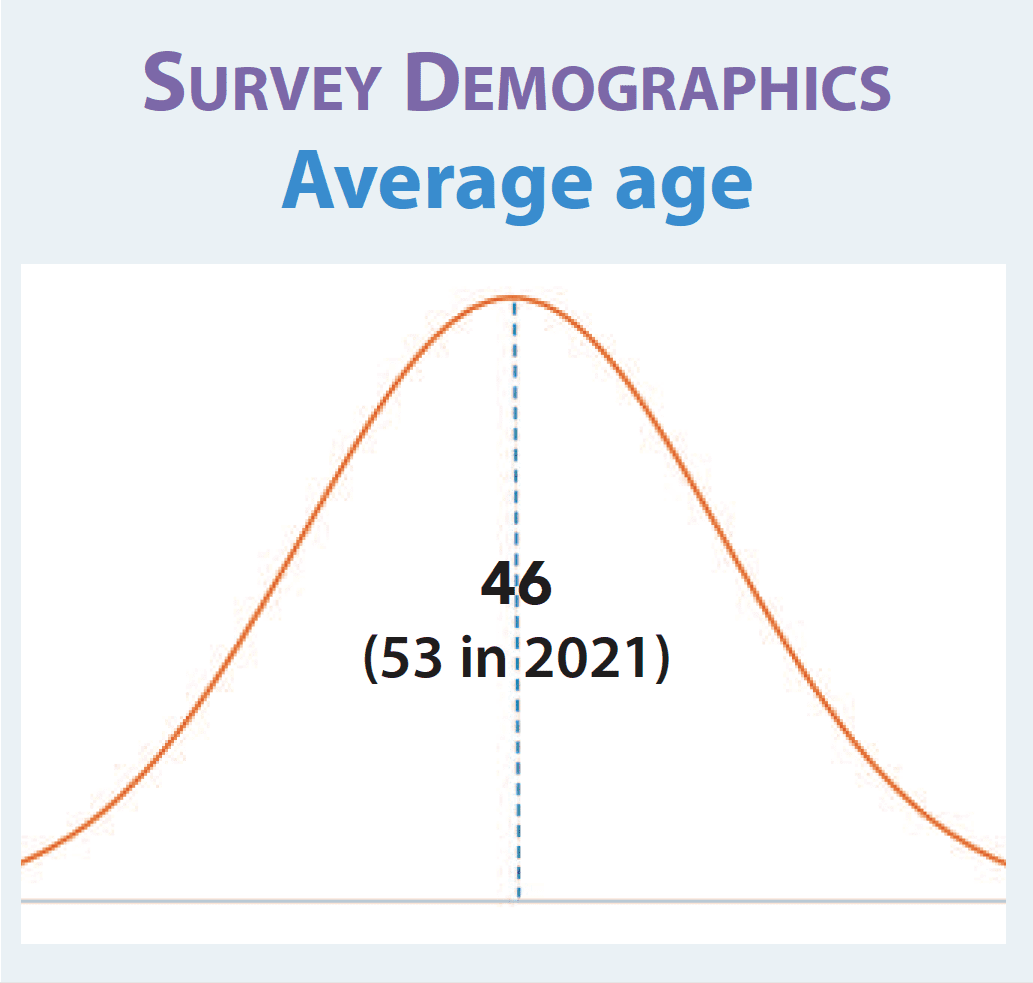 Other interesting differences include the following:

This year’s responses to questions related to workplace violence indicate that The Joint Commission’s workplace violence–related mandate that went into effect in January 2022 might be having some impact. Compared to 2021’s survey, reporting of assault and bullying incidents was higher in every category except with regard to verbal assaults from patients. In addition, satisfaction with the response to a report increased significantly. For example, the percentage of those who were satisfied with the handling of a report of verbal assault or bullying from a manager increased from 18% in 2021 to 65% this year.

Workplace violence: What nurses are saying

An additional sobering indication of continued violence was that two thirds (66%) of respondents reported they had witnessed someone being bullied in the past 2 years, up from 48% in 2021. Of those who witnessed an incident, more than half (53%) intervened, with saying something to the bully in public during the incident the most common response (52%), followed by speaking with the bully in private about the incident (40%) and reporting the incident to the manager (37%). (Respondents could choose more than one option.)

Comments from nurses confirm that violence remains a major concern, with many calling on it to stop and for legislation addressing the issue.

A few comments noted that organizations are addressing this issue:

Nurses who experienced a workplace violence incident but didn’t report it were asked to select a reason why. The most common responses were that they did not think the incident was serious enough and they did not think anything would be done about the situation. However, when a manager verbally assaulted or bullied a nurse, the most common reason was fear of reprisal.

Encouraging nurses to report incidents and acting on those reports are key to addressing violence, but the ultimate goal is to stop violence from occurring in the first place. Survey results may indicate the elusiveness of that goal. Incidents of every type of assault or bullying were higher—sometimes significantly—compared to last year, particularly in the case of patients’ family members or visitors. Reports of verbal assaults or bullying by this group rose from 34% in 2021 to 41% this year and physical assaults rose from 3% to 14%. Other notable trends include the increase in the percentage of those reporting physical assaults by managers (from 1% to 11%) and the increase in the percentage of those reporting physical assault by another employee (from 3% to 12%). However, the increases also may reflect the increased willingness of nurses to speak up about violence and not represent an actual rise in incidents. 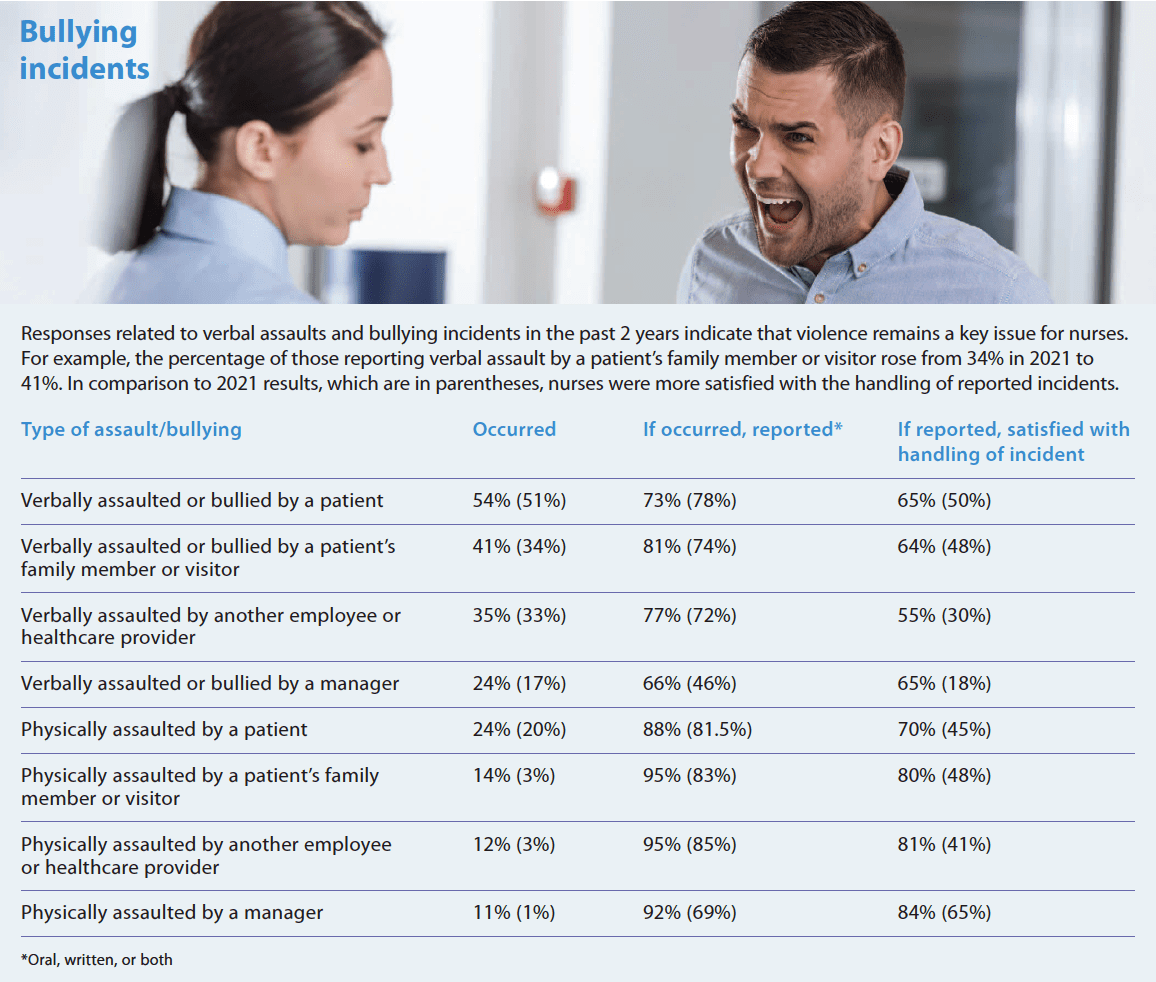 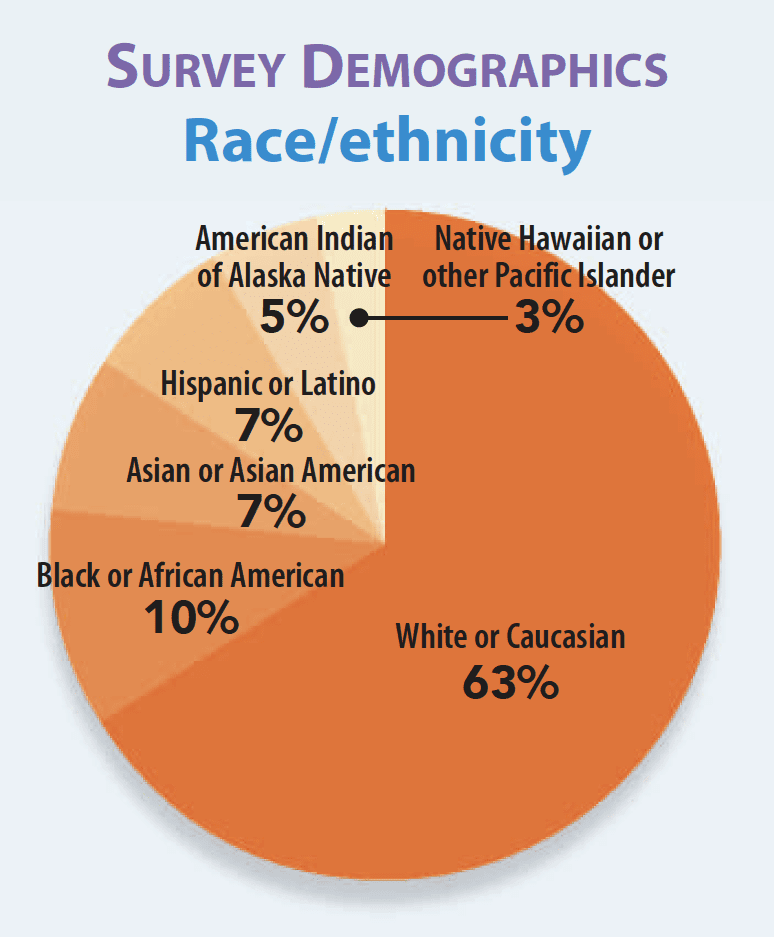 Although COVID-19’s domination of the news cycle has faded, that doesn’t mean it’s not continuing to have a significant impact on individual nurses, staffing, and the profession. Two-thirds of managers reported that the pandemic had resulted in higher than usual staff shortages, and nearly half (48%) continue to tap into more temporary staff.

When asked how COVID-19 had changed their career plans, many responded that they had changed jobs and/or specialty (26%), no longer actively work in bedside nursing (24%), or plan to leave nursing sooner than expected (27%). Hundreds of nurses added comments, with most reflecting on the pandemic’s toll, as indicated by statements such as, “Less fulfilled with being a nurse,” “Emotional and physical burnout,” “I’ve had to assume more responsibility and work with less resources,” “The change in academia has taken the joy out of teaching,” and “Hospital staff are tired: Tired from working understaffed, lack of supplies, angry families that do not like to follow rules or do not like the rules implemented for safety in a pandemic environment.”

COVID-19: What nurses are saying

Although many respondent comments about the pandemic highlighted the negative effects, several noted positive comments, such as the following:

When it comes to organizations, participants reported an average satisfaction level of 3.49 (vs. 3.33 in 2021) on a scale of 1 to 5 in terms of their employers’ response to COVID-19, but only 35% felt “satisfied” with the response, compared to 75% in last year’s survey. In addition, only slightly more than half (56%) thought their organization was “well” or “extremely” prepared to handle a surge in patients from a pandemic, natural disaster, or another reason for a sudden influx of patients.

Most nurses remain committed to the profession, as indicated by responses to a question asking them to share their most inspiring experience within the profession from the past few years. Replies included the following:

We at American Nurse Journal thank you for what you do every day for your patients, students, colleagues, and general public.

Cynthia Saver is president of CLS Development, Inc., and editor of Anatomy of Writing for Publication for Nurses, 4th Ed. Her blog, The Writing Mind, is available at myamericannurse.com/category/the-writing-mind.