Creating opportunities for nurses and giving respect to tradition

With the stirring music and sacred smoke of a traditional Native American blessing, the first indigenous nursing research center in the world was dedicated in May 2017 at the Florida State University (FSU) College of Nursing in Tallahassee, Florida. Led by Executive Director John Lowe, PhD, RN, FAAN, the Center for Indigenous Nursing Research for Health Equity (INRHE) aims to attain health equity through research, education, and service by partnering with indigenous peoples, communities, organizations, and supporters globally.

Lowe, who is the McKenzie Endowed Professor for Health Disparities Research at FSU, envisions the center developing “a strong unity among global nurses” who are working to increase health equity in native communities. Lowe has spent his career exploring health disparities and inequities in indigenous communities and studying cultural practices and traditions that have proven helpful in alleviating the effects of those disparities.

Health equity goes further than eliminating health disparity. “Just because we reduce disparities [in indigenous populations] doesn’t mean we are optimizing health,” said Lowe, a Florida Nurses Association member. “As indigenous or Native American people, we believe health equity is an inherent right,” he explained. “Our ancestors sacrificed land, lives, and culture so that their descendants could have what was promised through treaties and other means. But we were left with inequities and disparities. This context is important to why we strive for health equity.”

The estimated worldwide population of indigenous people is 370 million; they belong to 5,000 different groups and speak about 4,000 languages. The INRHE center currently has projects in collaboration with multiple tribes in the United States and is developing projects with indigenous communities in Canada, Australia, Panama, and New Zealand.

Lowe would like to see the center build relationships with other health disciplines. And, he said, “We want to be a hub, not just for indigenous nurses, but for other nurses who know the issues.” Connecting with indigenous populations globally also is critical, as they share common experiences with colonization and dispossession, he noted.

The center hosted the first International Indigenous Nursing Research Summit in May 2017. To ensure a broad array of viewpoints, the center’s advisory board council is made up of indigenous and nonindigenous scholars from around the world.

Advisory Council Member Odette Best, PhD, RN, associate professor of nursing and midwifery at the University of Southern Queensland, called the summit the most empowering indigenous health conference she’s ever attended. “This was due to Professor Lowe’s ability to pull together global, indigenous nurses to present our research to fellow indigenous nurse researchers,” said Best, who is an Aboriginal Australian.

Traditions and clinical practice can coexist 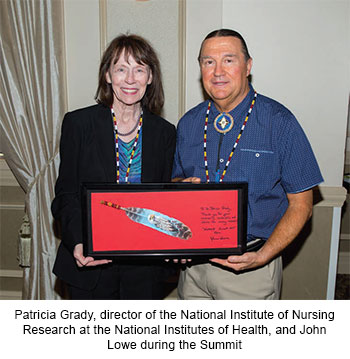 A Cherokee Native American, Lowe is one of just a few Native American male RNs and was honored in 2016 with the American Nurses Association’s Luther Christman Award, which recognizes the achievements of men in nursing. While earning his BSN, MSN, and PhD, Lowe worked in clinics and provided nursing instruction around the United States and in Tanzania, China, Jamaica, and Costa Rica. He has received funding from the National Institutes of Health for his work on Native American substance abuse prevention, including an after-school substance abuse prevention intervention called the Intertribal Talking Circle, which has been acknowledged by the U.S. Department of Justice’s Office of Justice Programs as a Promising Evidence-Based Program for the well-being of youth.

The Talking Circle is an example of the culturally congruent interventions that INRHE center researchers will focus on. “Healthcare professionals should learn more about [indigenous or native] practices and learn to work with them,” Lowe said. “If a native or indigenous person were to present themselves in a healthcare setting and report that they were using a traditional medicine, how would the healthcare provider assess that respectfully?” Increased education about indigenous practices furthers understanding and can prevent potentially unsafe interactions. For instance, “If a native person is using some kind of traditional plant, [the healthcare provider] needs to be knowledgable about that” to avoid potentially unsafe interactions, Lowe explained. 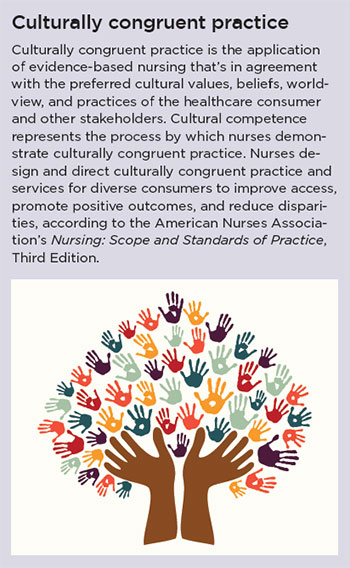 In 2015, a new standard of professional performance, Standard 8: Culturally Congruent Practice, was added to the third edition of the American Nurses Association’s Nursing: Scope and Standards of Practice, which is in accord with how Lowe hopes the INRHE center’s work will translate into practice.

Competencies for RNs at all levels include:

Additional competencies are delineated for graduate-level prepared RNs and include “develops recruitment and retention strategies to achieve a multicultural workforce.” Similarly, additional competencies are specified for advanced practice RNs, including “promotes shared decision-making solutions in planning, prescribing, and evaluating processes when the healthcare consumer’s cultural preferences and norms may create incompatibility with evidence-based practice.”

“Nurses in indigenous communities around the world are delivering most of the health care. It only makes sense that nurses act as the catalyst for research,” Lowe said. He sees nurses researching particular health problems in specific communities and how traditional living and healing practices are working— and how they might complement evidence-based interventions.

Melessa Kelley, PhD, RN, is one of the center’s postdoctoral fellows. Her current research focuses on obesity prevention among Native American youth. 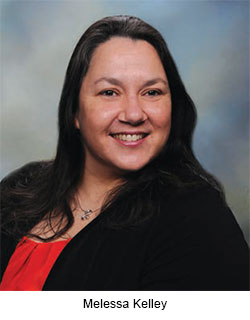 “The center has provided me with many amazing opportunities to network with nurse scientists around the world,” said Kelley, who has presented her research at several conferences. Last summer, she was the only Native American selected to attend the National Institute on Minority Health and Health Disparities (NIMHD) Health Disparities Research Institute (HDRI) as a Research Scholar, where she learned about innovative approaches to research and grant opportunities that address health disparities. Kelley believes collaboration via the center will continue to elevate health equity research.

Although part of the center’s purpose is to educate nurses and healthcare providers about the needs and characteristics of indigenous populations, it also serves to help increase the number of Native Americans who are PhD-prepared nurses. Lowe said he wants the center to provide “great research experiences” as well as opportunities for connection and networking. He hopes that fellows of the Minority Fellowship Program of the ANA see the center as a place where they can gain experience working with indigenous people and launch post-doctoral careers.

Elizabeth Moore is a writer at ANA.