From our readers…Beauty in the eye of the beholder: The life of a wound, ostomy, and continence nurse 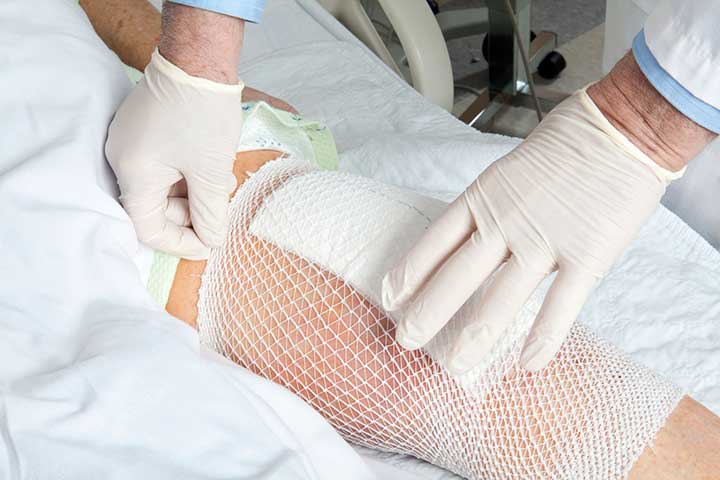 I think it’s in the eyes. That’s where the connection begins. A view into the real person, not defined by his or her disease or deformity. A calm settles in the room when a patient trusts that you are not there to judge, to turn away, to hold your breath, or to rush the visit. You are there to address what no one else will: a deep and painful pressure ulcer, a fungating cancerous lesion, a newly formed ostomy, or a fistula with unmanageable drainage. You are there to treat with the sincerest of intentions, and to offer comfort, in an expert and sincerely caring manner.

I have chosen to practice in a nursing specialty where few other nurses have. I am a certified wound, ostomy, and continence (WOC) nurse practicing in a large, urban hospital. I feel valued by and privileged to work with my patients, families, and staff. This is a tough job, but someone has to do it, and I am thankful to have found the beauty where some find it impossible. Here are a few stories that show what I do.

Mr. Parker* was admitted from the ED for “gangrenous legs,” at least that’s what it said on the consult slip. He had been at another hospital earlier in the day. Mr. Parker said the nurse at the other hospital told him his legs would “have to come off.” Talk about fight or flight, and that’s just what he did. He left that hospital and came to ours. A WOC consult was promptly initiated and that’s when I arrived on the unit.

The odor hit me before entering the room. Mr. Parker was lying comfortably in bed, browsing through the lunch menu. He looked over his glasses and offered a cursory hello. I introduced myself with my standard first line, “Hi I’m Lisa, the wound nurse”. His eyes quickly narrowed. “Oh, I’ve already seen the wound nurse and she said I needed my legs cut off.” Without skipping a beat, I closed his door and asked if I could see his legs and talk a bit. He agreed and his eyes followed as I lifted the sheet. Indeed, they were a bad looking pair of legs, evidenced by years of poor circulation with the resultant heavily draining, plaqued and darkened skin, leaving a heavy malodor in their wake.

I knew what he was waiting for. Something that happens every time someone looks at his legs. He was waiting for the look of disgust. Well, he wasn’t getting that from me. “How long have your legs been swelling and draining (a small spark of recognition from Mr. Parker), and do they get better when the swelling goes down (a slight lift of his mouth in the form of a smile), and have you been slowing down lately?” He replied, “I can’t care for my legs like I used to. My wife died last spring and she helped me a lot.” He sighed in relief that someone had taken the time to allow him to reveal his story. You see, his legs were not gangrenous, merely the result of poor circulation and limited care resources.

The next thing I did dazzled him. I told him I’d be right back. After calling the attending physician to request a vascular consult and putting in a referral for discharge planning, I went to the supply room to gather some items. When I returned, I told Mr. Parker that today was “spa day.” I ceremoniously laid out the supplies — cleanser, moisturizer, and lots of warm water and towels. We spent the next hour chatting about his life as a retired corrections officer. He was able to fully relax, warming to the connection of human touch.

“Tell that nurse to come here”! Ms. Jones* was yelling in the background as I answered the phone. “Can you come now? I really need you!” said a desperate staff nurse. Ms. Jones was a frequent flyer, a saying I am not fond of but one that describes the cycle of acute admissions and discharges that some patients endure. A fungating wound from breast cancer. A history of substance abuse, homelessness, and general hard living.

The first time we met was the year before. She had this “thing” on her chest that “smelled,” and no one could stand being around her. The first time she was nervous, eyes darting between her boyfriend and me, displaying fear and mistrust. She asked if there was anything I could do for the smell. Gently I shifted her hospital gown and removed the wad of paper towels stuck to her breast. It is interesting how most cancerous lesions are not painful. They are mostly malodorous and produce drainage (lots of it). She wanted to know how to care for herself and to feel “clean.” With her limited resources we came up with a plan, which was this: get into the shower and wash with soap and water (she was amazed by this alone, having no idea it was an option), then, cover the area with a maxi pad and secure it in place with her bra.

As pleased as she was with this simple and effective regimen, she was hanging on for something else. And then it came to me; a simple pair of mesh panties (the kind given to moms immediately post-partum), crotch cut out forming a tube top. She could wear this and ditch the bra. Well, there were hugs and kisses all around and a few tears as well. This was only the beginning of our relationship.

Now the staff nurse was requesting my urgent attention. When I arrived, Ms. Jones wasted no time in getting to the point. The cancer had spread to her other breast. She was out of breath and agitated. “I need more of those tube tops.” She unbuttoned her gown to reveal a threadbare pair of panties that she’d been hand washing for some time. The pack of 20 I gave her to take home was priceless to her. I didn’t see Ms. Jones again after that visit. I imagine she is in a better place, free of disease and distress. Her feistiness stays with me, and when I close my eyes I can see her on that first visit, stepping out of the shower, smiling from ear to ear, and smelling like a rose.

Mr. Garris* was mad! Mad at the staff, mad at his failing body, and mad at his no longer deniable disease. He had colon cancer and many abdominal surgeries over the last few years plus several rounds of chemo and radiation. His belly was riddled with scars. The fistula was all but inevitable. It began at home as a pinpoint opening through the tissue thin skin of his abdomen, with slow drops of drainage. By the time folded gauze and tape couldn’t manage the drainage, on a Friday afternoon he called his doctor. The secretary called to see if I could come to the office to “perform my magic.” I needed to come up with a way to re-direct the drainage, if only for the weekend, so Mr. Garris could avoid admission and celebrate his wife’s birthday at home. He’d planned the meal — shrimp and steak and a nice Merlot. He didn’t want to disappoint his wife. Armed with various pouches, I began my “art” project. Creativity is the key in managing fistulas. We devised a secure pouching and sent Mr. Garris home with extras.

On Monday morning, his name came up on the inpatient census. The pouch had lasted through Sunday morning, allowing time for his celebration dinner. Unfortunately, my initial stroke of pouching good luck turned into day after very trying day (seven, to be exact) of failing miserably with every kind of pouching system available. With each day, his frustration rose as my confidence waned. The drainage was increasing and burning the surrounding skin. On day eight, Mr. Garris refused my visit, shouting from behind the door, “I’m tired of trying; nothing works anyway. Don’t come in.” He was discharged that afternoon to the comfort of his wife and his home surroundings, managing his drainage his own way. I was devastated, not used to admitting defeat, wondering if my fellow WOCs could have found a way to manage him better than I had.

Truth be told, our small “society” of WOC nurses enjoy the highs of working with our patients and their families, and finding a way when others cannot, but the lows are very low. We are supportive to each other and lift each other up, which helps to refuel us so we can try again. I can’t imagine doing any other kind of nursing.

*All names and identifying information has been changed to protect the patients.

Lisa Owens is a certified wound, ostomy and continence nurse practicing at a large hospital in Baltimore City, Maryland. If what you have read has peaked your interest, please visit www.wocn.org to find out how to become a CWOCN.

Facebook
Twitter
Pinterest
Linkedin
Email
Print
Previous articlePhysiology review: Circulatory system
Next articleFrom our readers…Know your A, B, C, and D’s for patients with progressive disease