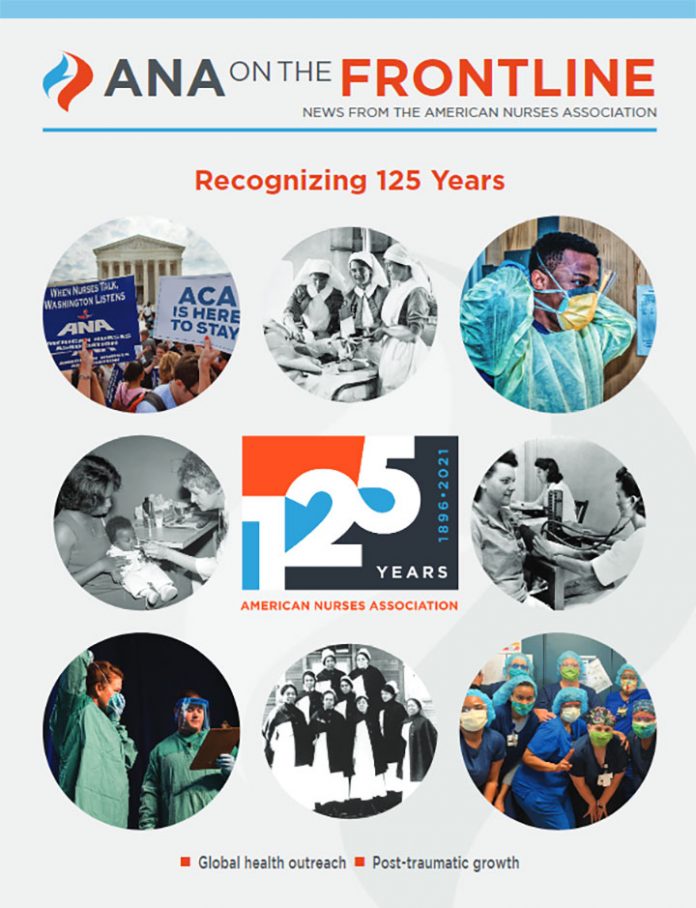 As the American Nurses Association (ANA) marks its 125th anniversary this year, many issues that animated its founders in 1896 still ring true for the profession. When delegates from 10 nurses’ alumnae associations met in 1896 at the Manhattan Beach Hotel near New York City to form what became ANA, they were interested in elevating nursing education standards, setting principles of conduct, and promoting the professional status and general welfare of nurses. 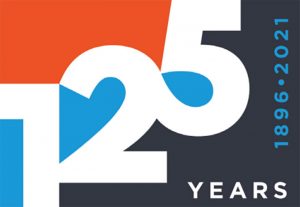 Professional strides over the ensuing century not only have advanced nursing practice significantly but also transformed systems of care and boosted health outcomes for generations. ANA has persevered on this journey, in dialogue with nurses nationwide, constituent/state nurses associations, healthcare stakeholders, and the public. Yet the fundamentals remain: The ANA Enterprise seeks to drive excellence in practice, equip nurses with the tools they need to succeed professionally, and ensure nurses’ voices and vision are recognized by policy leaders, healthcare influencers, and employers.

“The ANA Enterprise story is the evolution of nursing in this country and the history of the profession,” said ANA Chief Nursing Officer Debbie Hatmaker, PhD, RN, FAAN.

One of the first challenges ANA took on was the need to standardize early training programs. A modest 15 hospital-based schools in 1880 had mushroomed to at least 430 by 1900. Each was structured to meet the needs of an individual hospital, so nurses were trained to practice according to a very narrow scope of care. Nursing correspondence courses also surfaced, graduating so-called trained nurses after as little as 10 weeks of bookwork and no clinical experience.

A trained nurse at that time meant “anything, everything, or next to nothing,” according to ANA’s first president, Isabel Hampton Robb.

Over the subsequent decades, ANA went all in on advancing professional standards for nurses, collaborating closely with state nurses’ associations, which initially had been organized to work toward state laws controlling nursing practice. The march to more rigorous standards has continued right up to the present day.

By 1923 ANA had appointed its first special committee on ethical standards, with a tentative code of ethics for nurses adopted in 1926. In 1940, ANA and the National League for Nursing Education (today’s National League for Nursing) published a Digest of Nurse Practice Acts and Board Rules to facilitate state registration of nurses by reciprocity. Within 10 years ANA adopted a code of ethics for professional nursing, and in 1968 the House of Delegates adopted a new code for nurses that delineated ethical principles of practice.

The year 1974 marked the beginning of a particularly fertile period with standards developed for five practice areas. That same year ANA certified 99 RNs for excellence in clinical nursing practice.

The ANA Enterprise has maintained a proud tradition of promoting clinical excellence, with the American Nurses Credentialling Center now celebrating its 30th anniversary. ANA similarly has kept a drumbeat of new and continually revised standards, most recently publishing the 4th edition of Nursing: Scope and Standards of Practice.

Coupled with its push to advance the highest standards of practice, ANA has pressed the case for nurses’ interests on many fronts. The association organized a legislative section in 1921 to study employment, salaries, and working conditions for nurses, and to advocate for public policies on these and other issues, such as health insurance.

ANA also engaged in a long-running struggle to have nursing officially recognized as a profession. In the 1930s, a personnel classification board established by Congress classified nurses as nonprofessional; not until 1946 was nursing designated as a profession by the U.S. Civil Service Commission.

“We’ve earned our right to be highly regarded, full members of the healthcare team,” said ANA President Ernest J. Grant, PhD, RN, FAAN, of these efforts to set standards and define the profession. “The demands that nurses placed on themselves so that their work would be considered a true profession rather than a trade greatly advanced who we are as nurses. Having our own body of work and holding ourselves to a higher standard have helped us achieve the position that we have today.”

As the profession matured so did ANA. In 1955, it organized the American Nurses Foundation (the Foundation) as the association’s research, education, and charitable affiliate.

The quest for better working conditions

While nurses provided extraordinary service during the Great Depression and World War II, they also endured difficult working conditions. Nurses left the profession in frustration with inadequate salaries and unsatisfactory surroundings. Consequently, in 1946 the ANA House of Delegates voted to inaugurate a long-range comprehensive program to stabilize nursing services, improve working conditions, and provide economic security for nurses in all fields. State nurses’ associations were urged to conduct active programs, including collective bargaining. That same year, the House of Delegates also endorsed an 8-hour day, 40-hour week for all nurses.

In addition to continuing its strong advocacy for nurses’ health, safety, and working conditions, ANA has taken a stand on key social and health legislation. As early as 1958 the House of Delegates endorsed healthcare as a right of all people and urged the extension of social security to include health insurance for beneficiaries of old age, survivors, and disability insurance. Decades later, after passage of the Affordable Care Act (ACA) in 2010, ANA in 2012 joined five other healthcare groups in filing an amicus brief with the U.S. Supreme Court in support of the ACA “minimum coverage provision.”

During the COVID-19 pandemic ANA pushed hard for passage of the Coronavirus Aid, Relief, and Economic Security Act, which included more than $2 trillion in spending and tax breaks to help the economy and support healthcare providers responding to the pandemic. The association has been vocal not only about the necessity of boosting domestic production of personal protective equipment and promoting a more sustainable supply chain but also expanding the use of telehealth services to deliver efficient, cost-effective care. ANA also advocated for the Dr. Lorna Breen Health Care Provider Protection Act (S. 610/H.R. 1667), which passed the Senate on August 6. This legislation aims to reduce and prevent suicide, burnout, and mental and behavioral health conditions among healthcare professionals.

Today’s public health crisis is not the only one the nation’s nurses and ANA have confronted. The organization was barely off the ground when nurse Clara Louise Maass lost her life in the quest to determine the cause of yellow fever. Honored decades later in ANA’s Hall of Fame, Maass exemplified the dedication of nurses throughout time. As Hatmaker observed, “Again and again, nurses have been faced with extraordinary circumstances… and then demonstrated their skill and fortitude.”

During the 1918 influenza epidemic, which killed about 675,000 individuals in the United States, the nation’s 66,000 plus RNs and over 17,000 unregistered nurses fought valiantly against the then-undetectable virus.

In 1947, rapid scientific advances yielded a remarkably different result in New York City. Another member of ANA’s Hall of Fame, Nettie Birnbach, EdD, RN, FAAN, recalled in 1996 her tenure at Willard Parker Hospital, a communicable disease hospital. After a gravely ill patient was admitted with what turned out to be smallpox, the city successfully vaccinated 6.35 million people in less than 1 month, with just 12 people contracting the disease and only two dying from it.

Recognizing the importance of readiness to confront future outbreaks, ANA has collaborated with expert organizations like the Association for Professionals in Infection Control and Epidemiology and the Centers for Disease Control and Prevention (CDC) to develop training programs for nurses. In 2015, ANA joined with CDC to educate and train nurses on avoiding infection when caring for patients with highly contagious diseases such as the Ebola and Zika viruses.

As the COVID-19 pandemic hit U.S. shores in 2020, ANA quickly created a COVID-19 Resource Center to provide nurses with the latest evidence-based information. The Foundation also acted rapidly to understand the pandemic’s stressors on nurses and to support their mental health and well-being, which was sorely tested during this public health emergency that has cost more than 668,000 lives as of September 17.

Also in 2020, ANA joined forces with CDC on Project Firstline to provide foundational and practical infection prevention and control knowledge for frontline healthcare professionals. As the COVID-19 pandemic continued well into 2021, on September 1 the association called on the Biden administration to declare a national nurse staffing crisis and take immediate steps to develop and implement short- and long-term solutions.

The path toward justice and inclusion

Just as American society and culture have evolved over the past 125 years, so has ANA. Unable to join the association at its founding, 52 Black nurses met in New York City in 1908, founding the National Association of Colored Graduate Nurses (NACGN). Their aims were to promote higher professional nursing standards, eliminate discrimination, and develop leadership among “Negro” nurses.

In 1920, ANA appointed a committee on the status of Black graduate nurses to establish lines of communication with the NACGN, but not until 1948 did the association’s House of Delegates formally call for eliminating discrimination against minorities. Two years later, ANA delegates adopted bylaw revisions to provide direct individual membership for Black nurses restricted from membership in their state nurses associations. In 1950, ANA delegates adopted an intergroup relations program to work for full integration of nurses from all racial groups in all aspects of nursing. Between 1950 and 1951, ANA absorbed the functions and responsibilities of NACGN, which was officially dissolved in 1951.

These changes marked the beginning of a dialogue that continues today about full diversity, equity, and inclusion in nursing, healthcare, and society. The National Black Nurses Association formed in 1971 due in part to Black nurses’ limited presence and influence in ANA’s leadership.

In 2020, the ANA Membership Assembly adopted a resolution on racial justice for communities of color, and ANA joined with the American Academy of Nursing to call for social justice to address racism and health equity. In January, ANA and a coalition of leading nursing organizations launched the National Commission to Address Racism in Nursing to examine the issue of racism within nursing nationwide and describe the impact on nurses, patients, communities, and healthcare systems to motivate all nurses to confront systemic racism.

This effort and others to speak out about and develop solutions for major healthcare and societal issues reflects ANA’s ability to adapt to the times, according to Grant. “We have to face the fact that we have a past we’re not very proud of, but we also were one of the first major organizations to admit minorities into our membership and the leadership chain,” he said. “Even now as we address racism, we are not afraid to speak out and take action on social justice issues. We have always looked out for the public’s health. And we’ve advocated along the way and also ensured that nurses have the resources they need to do their jobs.”

If today’s stresses and strains are unique to our times, ANA’s vision—a healthy world through the power of nursing—is not, said ANA Enterprise CEO Loressa Cole, DNP, MBA, RN, FACHE, NEA-BC. “It is a theme that would have even resonated with our ANA founders 125 years ago. They would be thrilled to see how nurses are being heralded around the world today as the heroes and heroines of the pandemic.”

— Genna Rollins is a writer-editor at ANA.

Post-traumatic growth and compassion: Tools to navigate the pandemic