The 10 members of the coordinators of patient placement and staffing at Boston Children’s Hospital pride themselves on their patient and family focus and their willingness to go above and beyond to do what’s right. And, according to Suzanne Reidy, director of patient flow and staffing, they’re “jacks of all trades. We are the in-house supervisors on the night shift, and everyone looks to us first for advice no matter what’s going on.”

All of these qualities are evident in the story this team shared as part of their submission for the American Nurse Today All-Pro Nursing Team award. Here’s that story in their words:

CM was a 2-year-old boy who was born with a congenital heart defect. He had two of the three surgeries that were needed to correct his defect, but after the second surgery, he suffered from poor ventricular function and was placed on the list for a heart transplant and maintained on milrinone infusion at home.

In December 2016, CM was admitted to the hospital for worsening heart failure. In March 2017, he suffered a cardiac arrest and was cannulated to extracorporeal membrane oxygenation (ECMO). He was on and off the transplant list because of sepsis and new seizure activity. Both parents were with CM daily, and they longed for a new heart for their beloved son. More months passed, and CM remained in the cardiac intensive care unit (ICU) on ECMO. 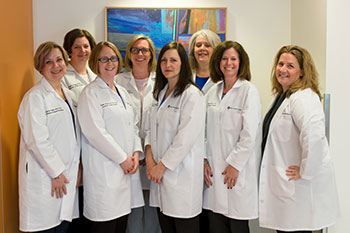 In early September, CM suffered a seizure and was in status epilepticus; he needed to be intubated. When he was extubated a few days later, he exhibited unequal pupils and disordered breathing. A computed tomography (CT) scan showed no new ischemic change, but his neurologic status continued to deteriorate rapidly. He was reintubated, and a CT scan with contrast was performed. The scan showed a brainstem hemorrhage. The parents were present and given the grim findings.

After such a lengthy ICU stay, the parents requested that he be taken to the hospital’s garden for extubation on a beautiful warm September afternoon. My team was called and asked if we could help expedite a garden visit for end of life. We quickly jumped into action. I called the security supervisor and explained the situation. The team was already en route to the garden with the family, so we had to move quickly. We paged engineering to open the door because the garden had just been renovated and wasn’t officially reopened yet. Because the garden is off a busy hallway and intersects three other hallways, we requested that security block each hallway and reroute staff and families.

The staff moved CM to the garden and placed him in his parents’ arms. He was extubated and died peacefully. The family was so grateful for this, and we hope that they can find peace in having their wish granted.

This team of nurses and other healthcare professionals pulled together on a moment’s notice to fulfill a deeply meaningful wish for a young family. The success of their effort speaks to excellent communication among team members and the hospital, a high level of responsiveness, honed decision-making skills, and true professionalism. All attributes of a cohesive and effective nursing team.