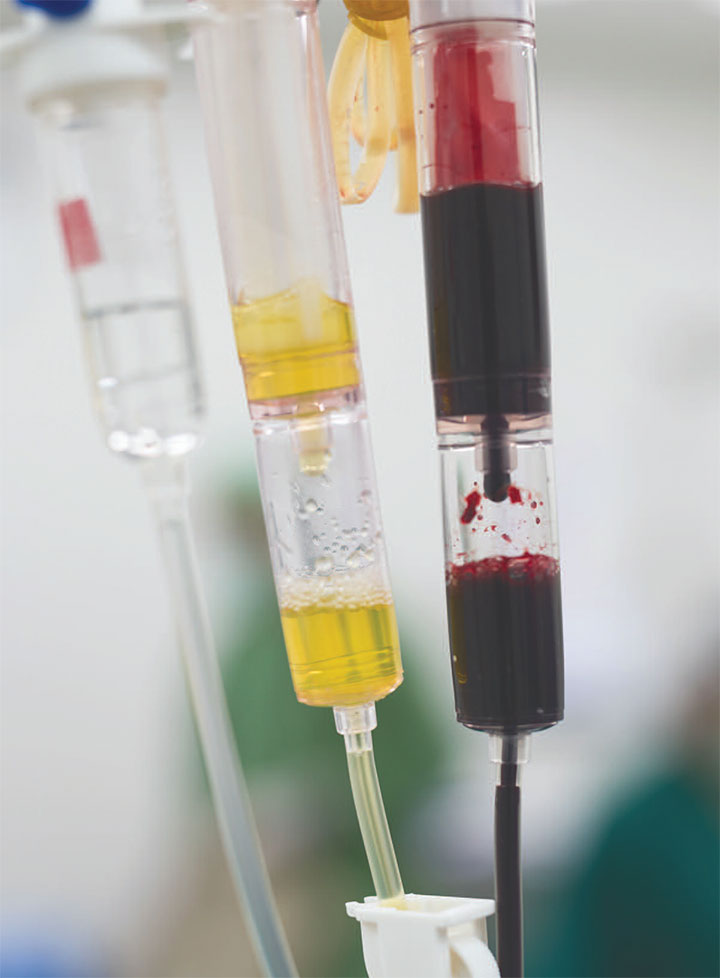 Risk stratification and quick intervention can save lives. 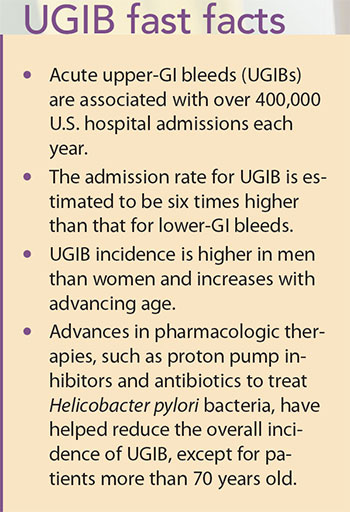 An acute upper-GI bleed (UGIB) is a significant cause of hospital admissions. (See UGIB fast facts.) Recent advances in care include risk stratification when the patient arrives in the emergency department (ED) to help predict the need for specific interventions, such as transfusions, therapeutic endoscopy, or surgery. The Glasgow-Blatchford Score (GBS), a stratification tool commonly used in EDs, is based on well-documented risk factors known to influence hospitalization and rebleeding. (See GBS—A risk stratification tool.)

In this article, we present a case study that uses risk stratification for early intervention of acute UGIB in the ED.

Mr. Sullivan arrives in the ED

A UGIB occurs above the ligament of Treitz, located between the jeju­num and duodenum. Possible causes include gastric and duodenal ulcers, esophagitis, gastritis, varices, and malignancies; drug-induced causes include overuse of nonster­oidal antiinflammatory drugs (NSAIDs). Aligning the potential cause of the bleeding with the symptoms helps pro­viders determine the source, improving care and over­all mortality.

Initially, the bleeding source may be unclear, and examining the stool alone isn’t a reliable indicator. Patients exhibiting hematemesis along with hematochezia may be bleeding from the upper-GI tract, esophagus, stomach, or proximal duodenum. However, when the patient doesn’t have hematemesis, the distinction between UGIB versus lower-GI bleeding must be determined quickly by completing a thorough history, collecting laboratory data, and using a risk stratification tool.

Management in the ED

Many of the patients who arrive in the ED with significant UGIB are elderly; patients older than 75 are at an increased risk of dying from a UGIB because of multiple comorbidities and polypharmacy. Thoroughly review the patient’s medical history and current prescription and over-the-counter medications—especially anticoagulants, aspirin, antiplatelet agents, and NSAIDs.

The patient’s cardiopulmonary health, cerebrovascular conditions, and history of GI bleeding will help you prioritize care. Keep in mind that more than half of patients with a history of GI bleeding are bleeding from the same lesion, and the presence of a single comorbidity doubles the mortality rate, which can range from 6% to 10%.

Providers may make decisions about fluid resuscitation based on findings from the physical exam. You can assess the extent of intravascular volume loss by carefully checking vital signs, mucous membranes, and urine output. You can presume that patients with an HR greater than 100 bpm and positive orthostatic changes in systolic blood pressure (defined as dropping 20 mmHg or more when moving from lying down to sitting) have a significant fluid volume deficit of at least 15%. Dry oral mucous mem­branes and a decrease in urine output to less than 30 mL per hour should alert you to changes in intravascular fluid volume.

Initial treatment in the ED includes placing the patient on a cardiac monitor, applying oxygen therapy with continuous pulse oximetry to maintain oxygen saturation above 90%, and inserting two large-caliber I.V. catheters. Fluid resuscitation for active GI bleeding includes lactated Ringer’s or normal saline solution and an immediate type and crossmatch for possible transfusion. The goal is to hemodynamically stabilize the patient.

Diagnostic laboratory data include CBC, serum chemistries, prothrombin time, and serum lactate. Note that the initial hemoglobin in patients with acute UGIB may be falsely elevated. After 24 hours, hemoglobin will decline as the blood is diluted by extravascular fluid entering the vascular space and by the fluids administered during resuscitation. Depending on the severity of the bleed, monitor the patient’s hemoglobin every 2 to 8 hours, as ordered.

Also monitor the blood urea nitrogen (BUN) and creatinine ratio to help determine the location of the bleed. Patients with a UGIB will have an elevated BUN to creatinine ratio (>20:1) as a result of increased blood protein absorption into the bowel. An elevated serum lactate may indicate decreased oxygen supply to the tissues and may be a useful predictor for increased mortality and a need for early intervention. Other diagnostic tools include gastric lavage. (See Get a clearer picture.) 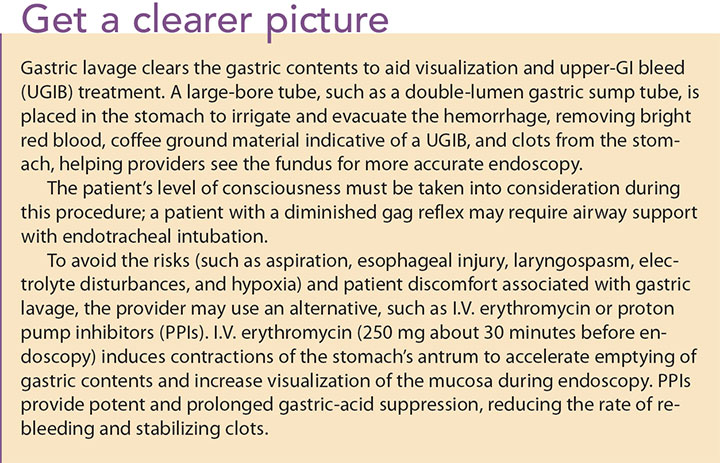 Assessment of an acute UGIB includes risk stratification to identify the need for intervention. The GBS is used in EDs to stratify risk and determine the best treatment options. Patients with a GBS of zero may not require any intervention and could potentially be discharged from the ED. Patients with scores from one to five are at risk and should be admitted to the hospital for further evaluation and management. High-risk patients with a score of six or more are admitted for immediate intervention to stop the bleeding.

After endoscopy, the GI team may conduct further risk assessment using the Rockall Score. This assessment tool includes clinical criteria associated with the GBS and endoscopic findings to predict the risk of rebleeding and death.

After fluid resuscitation, the pro­vider will determine whether transfusion is needed. Recent studies suggest transfusing the patient, depending on his or her clinical presentation, to maintain a hemoglobin above 7 or 8 g/dL. Typically, patients admitted with an acute UGIB are treated with I.V. proton pump inhibitors (PPIs) (for example, pantoprazole 40 mg twice daily) for 72 hours after endoscopy. Based on the patient’s risk factors, the gastroenterologist will decide whether to continue PPI treatment after discharge.

Endoscopic therapy for high-risk bleeds includes vasoconstrictor injections, thermal coagulation, and mechanical clipping. Early endo­scopy (within 24 hours of ad­mission) decreases the need for transfusion and reduces length of hospital stay for patients at high risk on the GBS. Note that 80% to 85% of patients with an acute UGIB will achieve hemo­stasis without intervention. 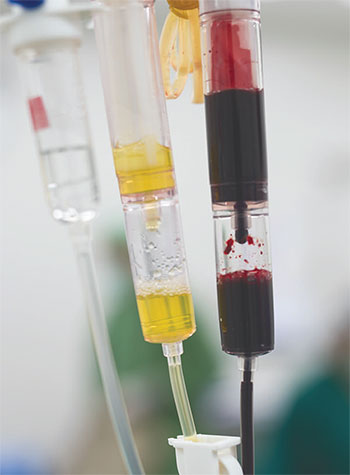 Mr. Sullivan’s BUN is 24.1 mmol/L with a serum creatinine of 1.1 mmol/L, giving him a BUN to creatinine ratio of 21:8 and suggesting an acute UGIB. Taking into consideration Mr. Sullivan’s vital signs and initial hemoglobin of 10 g/dL, Erin calculates his GBS to be 12, placing him in a high-risk category requiring immediate endoscopy. Subsequently, his provider diagnoses Mr. Sullivan with a bleeding peptic ulcer.

Before Mr. Sullivan is discharged, Erin teaches him how to recognize early symptoms of rebleeding, and she instructs him to notify his pro­vider if he experiences palpitations, dizziness, coffee ground emesis, or dark, tarry stools. Because of Mr. Sullivan’s comorbidities and anticoagulation therapy, the multidisciplinary team recommends that he remain on omeprazole 40 mg per day for his peptic ulcer disease. In addition to medication reconciliation at the time of discharge, alternative pain management (such as physical therapy for strength, flexibility, and balance; guided-imagery; bio­feedback; and relaxation techniques) is recommended to eliminate NSAIDs. A follow-up home visit is planned to ensure that Mr. Sullivan adheres to the plan of care and to provide support and assess for rebleeding.

The authors work at West Chester University in West Chester, Pennsylvania. Carolyn D. Meehan is the prelicensure program coordinator and an assistant professor of nursing. Catherine G. McKenna is the skills lab coordinator.