Identify the vessel, recognize the stroke 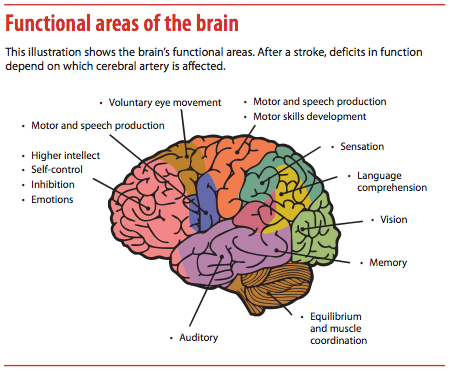 Early recognition and treatment of stroke can improve patient outcomes significantly. It’s essential that nurses in all settings know how to recognize signs and symptoms of stroke, and alert the stroke team or activate 911 immediately.

Early recognition and treatment of stroke

This article discusses the major cerebral blood vessels and the functional areas each vessel supplies—knowledge that helps you focus your neurologic assessment. Then it describes how patient
assessment differs by suspected stroke location. The American Stroke Association recommends clinicians perform neurologic assessments at least every 4 hours on patients with acute strokes. More frequent assessment may be needed for a patient who is unstable, has fluctuating signs or symptoms, or has received thrombolytics.

Strokes of the middle cerebral artery

The largest vessel branching off the internal carotid artery, the middle cerebral artery (MCA) is the most common cerebral occlusion site. For this reason, signs and symptoms of MCA strokes are the most important to remember. (See Major arteries supplying the brain by clicking the PDF icon above.)

The MCA feeds an enormous territory of brain, including the frontal, temporal, and parietal lobes and the brain’s deep structures—basal ganglia and internal capsule. The MCA has a main stem and several branches arising from it. Occlusion of the main stem affects the entire territory of brain supplied by the MCA. Distribution of the MCA is so large that a stroke of the main stem puts the victim at risk for severe disability or death. In contrast, occlusion of an MCA branch damages a smaller brain territory and causes less severe disability. (As an analogy, if a traffic accident occurs on a large interstate, the effect is severe, potentially disrupting an entire region or city. But an accident that blocks only a side street has a much smaller impact.)

Effects of a complete MCA stroke

The hallmarks of an MCA stroke are the focus of most public-awareness messages and prehospital stroke assessment tools—facial asymmetry, arm weakness, and speech deficits. Complete MCA strokes typically cause:

MCA strokes affect the face and arm more severely than the leg, so make sure to focus your assessment on the face and arm. Ask the patient to smile. If your patient can’t follow this or other commands, apply a noxious stimulus to induce a grimace, and observe for asymmetry of the lower part of the face. Next, assess hand and arm strength. If your patient is uncooperative, observe spontaneous movement and look for differences between the right and left sides. Also check for a palmar drift or hand or arm weakness.

Right side vs. left side

Laterality of an MCA stroke determines additional signs and symptoms. If the stroke affects the left (or dominant) brain hemisphere, the patient may experience aphasia (partial or total loss of the ability to communicate through language). Aphasia may be expressive (difficulty converting thoughts into language), receptive (difficulty understanding verbal and written language), or both.

To quickly assess for expressive aphasia, ask the patient to name common objects, such as a pen, a watch, or a key. Throughout the exam, note how the patient converses with you. Does he or she have difficulty naming objects or expressing thoughts?

To quickly assess for receptive aphasia, ask the patient to follow commands; for example, “Show me two fingers on your left hand” or “Open and close your eyes.” Note whether the patient follows these commands. Does he or she simply nod or shake the head in response to a “yes” or “no” question? Be aware that patients with receptive aphasia can understand nonverbal communication, including the stress and intonation patterns of speech; this may allow them to give the correct response.

Most people are left-hemisphere dominant, meaning the speech/language center is in the brain’s left side. Thus, expect a patient with right-sided weakness to have aphasia, and focus your exam accordingly. A small percentage of left-handed persons have right-hemisphere dominance. If your patient has left-sided weakness and aphasia, ask which is the dominant hand to better understand his or her signs and symptoms.

With a stroke affecting the right (or nondominant) hemisphere, the patient may show signs of unilateral neglect. This complex problem involves a spectrum of manifestations, including decreased awareness or failure to attend to the left side and lack of awareness or concern about the deficits. Note whether the patient has the head turned away from the left side or seems to ignore stimuli on the left side. Neglect is most often associated with right-hemisphere strokes, so expect a patient with left-sided weakness to have neglect as well—and stay especially alert for this sign.

Strokes in other vessels supplying the cerebrum

Although strokes affecting the brain’s other vascular territories are much rarer than MCA strokes, their features are important to remember.

The anterior cerebral artery (ACA) branches off the internal carotid
artery and supplies the anterior medial portions of the frontal and parietal lobes. It’s the vessel least commonly affected by strokes, so a stroke involving the ACA can easily be misdiagnosed. Classic signs of an ACA stroke are contralateral leg weakness and sensory loss. Be sure to evaluate lower-extremity strength and sensation. Keep in mind that behavioral abnormalities and incontinence also may occur.

The posterior cerebral artery (PCA) arises from the top of the basilar artery and feeds the medial occipital lobe and inferior and medial temporal lobes. Vision is the primary function of the occipital lobe, so a stroke affecting PCA distribution commonly causes visual deficits—specifically contralateral homonymous hemianopia. (While an MCA stroke also may cause this symptom, in that case the visual deficit stems from damage to the visual pathways rather than direct occipital-lobe injury.)

A patient who has had a PCA stroke may report inability to see out of one eye. To investigate this complaint, have the patient cover one eye; assess vision in each of the eye’s four quadrants, and repeat the exam in the other eye. Know that although patients with a right PCA stroke may report poor vision in the left eye, they actually have a visual deficit affecting the left side of the visual field of both eyes.

A stroke affecting the vertebral-basilar circulation can affect the cerebellum, brain stem, or both.

Cerebellar strokes commonly impair balance and coordination. Assess for ataxia (incoordination) by having the patient extend the index finger and then alternately touch your finger and his or her nose. Do this on both sides. Note difficulty moving the finger in a straight line. Next, have the patient slide the heel up and down the shin of the other leg, and repeat this on the other side. Again, note whether the patient has difficulty moving in a straight line.

If possible, have the patient walk as you assess gait. Can he or she walk in a straight line, or is the gait uncoordinated? Know that cerebellar strokes also may cause vertigo, nausea and vomiting, headache, nystagmus, and slurred speech.

Although rare, brain stem strokes can be devastating. Signs and symptoms differ with the specific stroke location, but may include hemiparesis or quadriplegia, sensory loss affecting either the hemibody (half of the body) or all four limbs, double vision, dysconjugate gaze, slurred speech, impaired swallowing, decreased level of consciousness, and abnormal respirations. Patients with brain stem strokes are likely to be critically ill and may require emergency intubation and mechanical ventilation.

A hemorrhagic stroke occurs when a cerebral artery leaks blood into the brain due to a nontraumatic cause, such as hypertension or rupture of an aneurysm or an arteriovenous malformation. Hemorrhagic strokes cause the same focal symptoms described above, depending on which artery is affected. However, they typically result in more pronounced headaches, neck pain, light intolerance, nausea and vomiting, and impaired level of consciousness than ischemic strokes. Generally, patients with hemorrhagic strokes are more critically ill than those with ischemic strokes.

Differentiating stroke from other conditions

Keep these key points in mind when evaluating your patient for acute stroke signs and symptoms.

Early recognition of a stroke is essential, because a stroke can’t be treated unless it’s recognized. Acute stroke interventions are time-sensitive. In most cases, they must be initiated within 3 to 6 hours of known onset. The ability to promptly assess stroke signs and symptoms can dramatically affect patient outcomes and reduce the risk of disability. Be your patient’s hero by recognizing a stroke.

Click the PDF icon above for an illustration of the functional brain areas, and information about a validated stroke assessment tool.