The year is 1989. The Hubble telescope is under construction for launch. The Cold War is ending with the fall of the Berlin Wall. And scientists are beginning to map the human genome.

Against this backdrop, a committee of nurses from diverse backgrounds at the American Nurses Association (ANA) recommends that ANA establish a Center for Ethics and Human Rights to better help nurses respond to the ethical issues of a changing world.

Twenty-five years later, the Center that opened its doors on Sept. 4, 1990, is recognizing its silver anniversary with the newly released 2015 Code of Ethics for Nurses with Interpretive Statements and a full mailbag—now mostly electronic—of questions and comments from nurses.

“Ethics is changing and nursing practice is changing. Our job is to keep up with the change,” says Felicia Stokes, JD, RN, a member of the Ethics Advisory Board, which recommends policy about nursing ethics to ANA’s Board of Directors.

In this “Year of Ethics,” as ANA has designated 2015, the Center continues its 25-year commitment to the human-rights dimensions of health care through its focus on such issues as moral distress and courage, expert care at the end of life, and nurses’ participation in the care of prisoners. Through its work, the Center advocates for nurses’ right to make independent judgments and to refrain, without retaliation, from work they find ethically objectionable.

The Center traces its origin to a 1989 ANA House of Delegates meeting, where a committee was appointed to recommend how ANA should address ethics and human rights. Beverly Malone, PhD, RN, FAAN, past ANA president and now chief executive officer of the National League for Nursing, was chairperson of that committee and remembers the tenor of the times.

Advances in technology—such as the world’s first artificial heart—posed new challenges to patient autonomy, and the HIV/AIDS crisis of the 1980s triggered questions about privacy and nurses’ risk and responsibility. A rise in homelessness was linked to the closure of residential psychiatric facilities.

“Everyone was being challenged, and nurses frequently were caught in the middle of [life and death] decisions,” Malone says. “How could we best advocate for patients?”

ANA was no stranger to thorny ethical questions. The association had long been steward of the Nursing Code of Ethics, which it adopted in 1950, and the profession’s awareness of its ethical challenges dated back to the 1893 Nightingale Pledge. But more was needed.

“There were no standards nationally for how nurses approach this,” Malone recalls. “ANA needed to step up to the plate.”

Keeping up with the times

The Center’s formation coincided with the development of the larger field of bioethics, according to Gladys White, PhD, MSN, RN, the Center’s first director and today a professor of global bioethics and cyberethics at Georgetown University. “We were tapping into that broader stream of ethical topics,” White says.

The Center established a network of ethics representatives from ANA’s state nurses associations, whose discussions “lifted ethics and human rights as an area of focus and expectation,” White says. “We had a snapshot of the nation.”

With a plan underway to map the human genome at the National Institutes of Health, the Center obtained grant money that had been earmarked to study the ethical, legal, and social implications of the project, White recalls.

“It was a pioneering effort to begin to understand how nurses managed genetic information,” says Colleen Scanlon, JD, MS, RN, who continued the project as the Center’s second director in 1992. Scanlon is now senior vice president and chief advocacy officer at Catholic Health Initiatives in Colorado. In 1995, ANA published Managing Genetic Information: Implications for Nursing Practice, with guidelines for nurses on informed consent and privacy concerns.

The 1990s exploded with technological and scientific advancement, leading to growing interest in end-of-life care and its implications, from comfort and pain management to assisted suicide and euthanasia.

“It was clear that nurses had a unique opportunity to contribute to the direction of end-of-life care,” Scanlon says, and the Center contributed to a compendium of position statements, Capitol Hill testimony, and a “friend of the court” brief to the U.S. Supreme Court opposing the legalization of assisted suicide in a landmark 1997 case.

ANA during the 1990s advocated for nursing in the national debate over President Clinton’s proposed healthcare reform plan. The Center examined healthcare justice issues, such as limited resources and inequities in healthcare delivery.

As the 21st century dawned, the Center completed a substantive revision of the Code, the first since 1985, while continuing to monitor the nursing profession’s voice in new debates over human cloning and reproductive technologies.

In more recent times, under the direction of author Laurie Badzek, the Center has developed and revised position statements on ethical topics, partnered with the National Institutes of Health to identify competencies related to genomics and nursing practice, created modules for continuing ethics education, and prepared publications aimed at helping nurses make ethical decisions in risky situations, such as reporting threats to patient safety, caring for patients with communicable or infectious diseases, and responsibly reporting questionable practices of colleagues. The Center has supported several national conferences on nursing ethics, including a nursing ethics symposium convened in June. Staff members have represented ANA in debates on ethics before state, national, and global bodies.

In January, ANA released another major revision, the 2015 Code of Ethics for Nurses with Interpretive Statements, ensuring that the Code applies to modern nursing practice and keeps pace with healthcare transformation.

Today’s 10-member advisory board is chaired by Vicki D. Lachman, PhD, APRN, MBE, FAAN, who says ANA position statements on human rights, end-of-life care, the role of the nurse in capital punishment, and safe access to medical marijuana are up for review and revision this year.

The Center continues to develop popular webinars, such as one held during National Nurses Week on the 2015 revision of the Code. A September webinar series is addressing palliative care, and a future webinar will be on human trafficking.

Ethics education in nursing school is also a focus. “It scares me how many nurses out there don’t know their ethical obligations under the Code,” Lachman says.

As the leadership did in 1990, the Center surveys ANA’s constituent and state nurses associations to determine their needs. “Universally, they are appreciative of us, the advice we give, and they want more educational events,” Lachman says. “People are hungry for this.”

Nurses associated with the ethics group since its inception express appreciation for the decision of ANA leadership to establish the Center. “I am totally honored to have been a part of it,” Malone says.

“I am grateful for their vision, that they recognized the importance of the domain [of ethics] to the integrity of the profession,” Scanlon said. “And that they have continued that commitment for 25 years is a testament to their vision.” 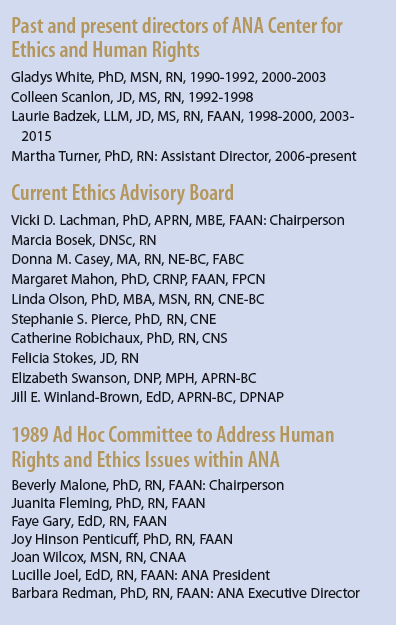 Laurie Badzek is director of ANA’s Center for Ethics and Human Rights. Kathryn Desmond is a registered nurse and writer.

Get your free subscription to NurseLine!