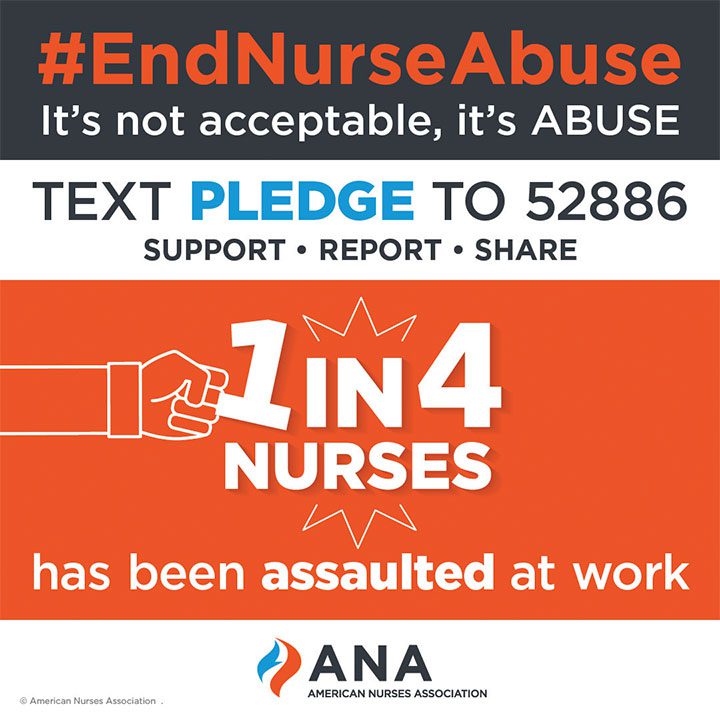 Take the pledge to #EndNurseAbuse

The American Nurses Association (ANA) has launched the #EndNurseAbuse initiative to increase awareness of the serious problem of physical and verbal abuse against nurses. ANA partnered with Alex Wubbels, RN, a Utah Nurses Association (UNA) member, to encourage individuals to stand with nurses and pledge to:

You can take the pledge by texting PLEDGE to 52886 or going to p2a.co/japlwMm. 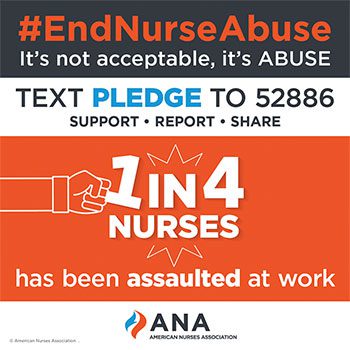 Wubbels, who was forcibly arrested in July when she followed her hospital’s protocol and did not allow a police officer to draw blood from an unconscious patient, wrote in an ANA guest blog post: “I truly believe that what happened to me can lead to positive change in our profession. That’s why I decided to speak out: to stop this abuse from happening to others. I’ve teamed up with ANA to ask you to sign our pledge and stop this culture of violence. I am committed to this goal so we are not put in situations where we have to fear for our safety, or have to choose between our jobs and our licenses.”

Earlier in October, Utah Nurses Association President Aimee McLean, RN, along with Salt Lake City police department Chief Mike Brown and other local police and nursing leadership, announced a new protocol for interactions between police and hospital staff in light of Wubbels’ July arrest. According to the Salt Lake City Tribune, McLean said that the new policy “clarifies the work of police and helps nurses—who provide direct care to patients—to know what to anticipate when working with law enforcement.”

In its work to curb workplace violence in health care, ANA set a zero tolerance policy in 2015. A revised position statement says, in part: “…nurses must be afforded the same level of respect and dignity as others. Thus, the nursing profession will no longer tolerate violence of any kind from any source. All RNs and employers in all settings, including practice, academia, and research, must collaborate to create a culture of respect that is free of incivility, bullying, and workplace violence.”

Learn more about ANA’s stand against workplace violence at www.nursingworld.org/MainMenuCategories/WorkplaceSafety/Healthy-Nurse/bullyingworkplaceviolence.