In most ways, human trafficking (modern slavery) is no different from slavery of ancient times: It’s a brutal, highly profitable business with no regard for its victims. As nurses, to grasp the impact we can have on the lives of trafficking victims, we need to understand the nature of the crime, its prevalence, how to recognize victims, and how to help.

This article focuses on sex trafficking—the most prevalent form of slavery in the United States. An estimated 14,500 to 17,500 people are trafficked into the United States annually and 100,000 to 200,000 American minors are exploited in the sex industry. Worldwide, 2 million children and young women are trapped in sex slavery.

Human trafficking victims face grave physical and emotional danger every day. Research suggests initial gang rape is a common method of recruitment into slavery. Threats of repeated rape if the victim doesn’t comply with demands are common. Some victims rescued from the sex trade report customers who didn’t like condoms and paid extra to avoid using them. This puts victims at great risk for sexually transmitted infections, unplanned pregnancy, and physical trauma from rape.

Physical abuse, rampant in the trafficking business, is a primary means of forcing victims to comply. A study of European trafficking victims found about 75% had been kicked, punched in the face, burned with cigarettes, hit with objects, dragged by their hair, or struck in the head. More than half had posttraumatic stress disorder. Also, many victims abuse or become addicted to the drugs or alcohol their traffickers give them (sometimes by force) to control them. What’s more, many victims suffer from chronic untreated disease, such as tuberculosis, diabetes, or asthma, as well as infestations, poor dentition, dehydration, and malnutrition.

These facts underscore the immediate and imperative need for healthcare advocacy for victims. Unfortunately, nurses may have limited knowledge about human trafficking and how to identify victims in healthcare settings.

In 2014, Katherine Chon, senior advisor on Trafficking in Persons for the U.S. Department of Health and Human Services, testified before Congress that roughly 75% of trafficked women saw a healthcare provider while in captivity. In most cases, this provider was in an emergency department (ED).

However, many victims can be identified in other settings where nurses are present, such as schools, health clinics, acute-care hospital units, dental offices, and jails. This encounter may be a victim’s only possible entry point into the social safety net—yet many trafficking
victims aren’t identified as such in healthcare settings. Once this opportunity is lost, it may never arise again, because traffickers typically don’t allow visits to care providers unless a victim’s health is so precarious that she or he can’t work.

Even victims who seek care may go unrecognized or be mistaken for domestic violence victims, drug addicts, or prostitutes. Failure to identify a trafficking victim in a healthcare facility can lead to tragic consequences or even death for that person. Because nurses are frontline caregivers for this population, they need to know how to identify victims and refer them to appropriate resources.

Victims who are immigrants probably have been told that authority figures are the enemy and will seek to arrest or deport them. Consequently, they may fear and mistrust anyone in a uniform, including a nurse’s uniform. Also, trafficking victims tend to be more isolated than domestic violence victims, to suffer disease or malnutrition, and to have little or no family contact. They’re also more likely to abuse substances.

Some victims, although cognitively intact, may be unable to verbalize their current location if asked. This is especially true of those trafficked into the United States from other countries. Not only are they in unfamiliar surroundings, but they also may see little of the outside world and may not even know where they are.

Be aware that adults and children who’ve been coerced into prostitution in the United States aren’t considered criminals. On the contrary, they’re victims of human trafficking and protected under the federal Trafficking Victims Protection Act. Persons younger than age 18 who are involved in commercial sex exploitation fall into the legal criteria for minor sex trafficking; their traffickers are prosecutable under the law. Nurses are considered mandatory reporters for suspected minor human trafficking victims.

If you suspect your patient is a trafficking victim, consider how best to approach him or her. Never ask outright if she or he is a trafficking victim, especially if a companion is present. Most victims probably don’t know what the term trafficking means. What’s more, few people—no matter how dire their circumstances—want to be called a victim because they’re trying to retain as much dignity as possible.

The most important thing to do is separate the suspected victim from the companion, because typically victims won’t speak openly in a companion’s presence. Sometimes, simply referring to hospital policy and the need to assess the patient’s physical status in private may persuade the companion to leave the room. If necessary, call for security to separate victim from companion.
If the victim doesn’t speak English, call for a medical interpreter. Be prepared for the companion to insist that he or she can interpret—but decline this offer, explaining that facility policy allows only for certified medical interpreters. Also consider cultural factors. For instance, female victims from patriarchal cultures typically are unwilling to speak up for themselves; the same is true of minors.

Anticipate that the victim will resist help. Feelings of intense fear, shame, and helplessness may even compel some to try to leave the facility without treatment. In some cases, a companion who senses that authorities suspect the true nature of the situation may force the victim to leave. So if you suspect trafficking, make sure a staff member stays with the victim at all times.

Human trafficking victims don’t receive preventive health care, so by the time ED or clinic providers encounter them, many health conditions may have become serious and victims may be in dire health circumstances. With this in mind, conduct a head-to-toe nursing assessment, providing as much privacy and comfort as possible. 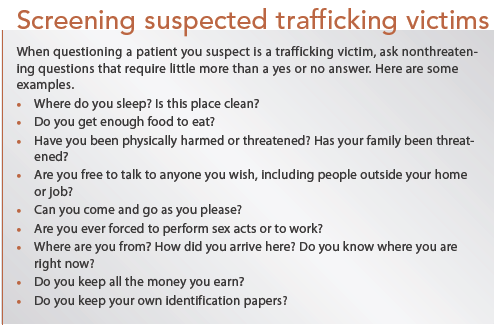 Psychosocial issues are prevalent among this population. Although victims may have pronounced anxiety or panic, some may be stoic almost to the point of complete withdrawal. (See Common assessment findings.) 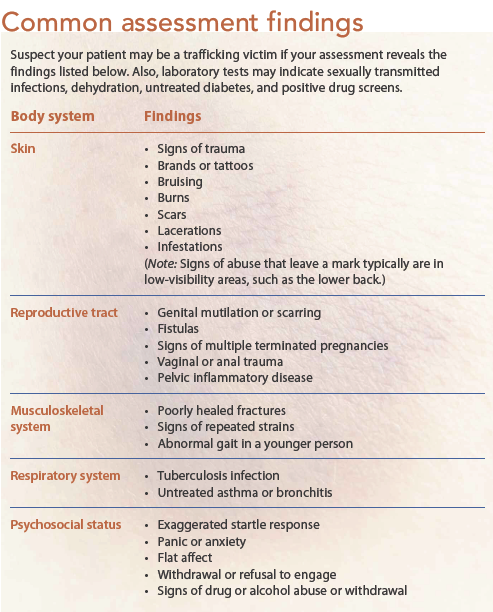 Finally, lack of trust may lead victims to suspect you’re trying to trap them into revealing information as a test of loyalty to the trafficker, putting the victim or the victim’s family in danger. Establishing trust is difficult but crucial, because the trafficker most likely has established himself as the only person the victim can trust and rely on.

A nurse may be a victim’s only point of contact with the environment outside captivity. To help rescue victims from a horrific life they didn’t choose, healthcare providers need to become knowledgeable about this crime against humanity. An excellent resource is the National Human Trafficking Resource Center. Consider posting the center’s toll-free number (1-888-373-7888) where patients can see it.

The more you know about trafficking and its victims, the more adept you’ll be at identifying them—and helping to rescue them. An in-depth grasp of how this population presents to healthcare facilities can help nurses identify and approach these vulnerable patients, create an effective plan of care, and advocate for them successfully.

U.S. Department of State. Office to Monitor and Combat Trafficking in Persons. Identify and assist a trafficking victim. state.gov/j/tip/id/index.htm

Pediatric sepsis: Are you ready?