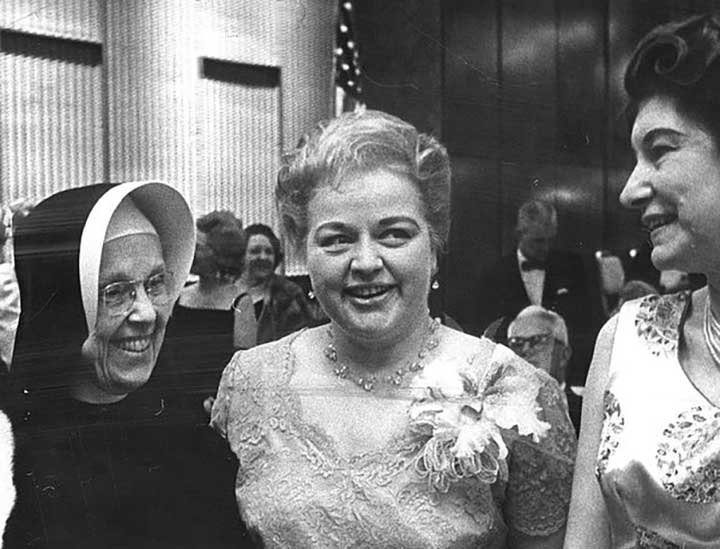 “Helmets down, lances up, full speed ahead.” Those were the parting words of inspiration Eleanor Elliott gave to colleagues last year when the National League for Nursing honored her with its President’s Award as a Champion for Nursing Education. High-spirited and fearless, Jo Eleanor was beloved by friends and family—and revered by colleagues as a visionary and a tireless advocate for advancing nursing education and research. We all mourn her passing in May at age 87.

After graduating from the University of Michigan School of Nursing in 1947, Jo Eleanor immediately joined the faculty. She advocated advancing the education of all nurses through promotion of college degrees, supporting loans and scholarship programs, and developing nurses’ research skills. Her distinguished career included leading the Division of Nursing of the United States Public Health Service (Department of Health and Human Services) as the nation’s top nurse. She also directed the Western Intercollegiate Commission on Higher Education in Nursing for 23 years.

Last summer, I had the great pleasure of moderating a panel discussion of seven past presidents of the American Nursing Association (ANA) during the ANA House of Delegates meeting, reflecting on their half-century of support for healthcare reform and increasing access to care for all Americans. Jo Elliott, the earliest president of ANA (1964-1968), recounted the organization’s journey from early support of federal health insurance to being the first healthcare organization to support the Social Security Act’s amendments that created Medicare and Medicaid. She also championed passage of the Nurse Training Act to Aid Professional Nursing Education in 1964.

The 1960s were a time of change and daring. In 1965, ANA issued its first position statement on the education of nurses; the goal was to ensure nurses received education to address the knowledge explosion and nurses’ ability to meet the patient care needs of the future. In adopting the position, ANA’s Board stated, “Education for those who work in nursing should take place in institutions of learning within the general system of education.””The controversial position recommended a baccalaureate degree in nursing as the minimum preparation of a professional nurse and an associate degree for a beginning technical nurse. It also recommended short, formalized vocational training for assistants in health occupation roles.

President Elliott sought to give 1966 convention delegates the opportunity to express their views on the position statement. Addressing the House of Delegates, she stated, “It is a monumental complicated, lengthy task to move from a statement of position to the effecting of change through orderly transition. No such change can be carried out without the full participation of nurses at every level of the organization. No such change can be introduced so rapidly as to threaten needed services to people. No such change can affect the caliber and standing of nurses at work in the field. No such change can come about merely because nurses wish it to occur. Changes in society will affect what occurs. No such change begins in this moment of time. It has been in process for decades. We are recognizing the realities of what is already occurring. No such change can be allowed to take place at the expense of the health services of this country, or at the expense of the nurses of this country. Change will occur anyway. Our task is to see that it is orderly, not chaotic—planned change rather than change that has been allowed to just happen.” (The profession prepares for the future. Am J Nurs. 1966 Jul;66(7):1548-67.)

Other landmark achievements during her tenure as ANA president included:

About a year ago, I was pleasantly surprised to get a phone call from Jo Eleanor. She wanted to talk with me about an article that had appeared in American Nurse Today. She admitted that at her age, she didn’t find computer communication easy and thought she’d just pick up the phone and call. We had a great conversation, and I was glad to learn she was an avid reader of every issue of our magazine.

We are grateful that Jo Eleanor faced every tough issue with courage. She lived her convictions and pioneered the path we tread today, promoting more education for nurses, leading change, and advancing health.

Looking beyond the pandemic: A virtual roundtable